Home | About | News and Announcements
About

The SCISA History Day, patterned after the National History Day Program, is designed to enhance reading comprehension as well as the verbal, analytical, reasoning and research skills of students. The theme for this year’s project was “Communication in History: The Key to Understanding,” and students addressed the topic’s significance and demonstrated an understanding of its proper historical context. The in-depth research, which included primary and secondary sources, was used for a process paper and annotated bibliography, exhibit, and oral presentation.

Second grade students Susanna Perkins & Jackie Lynch pose by just a few of the 2,594 food items that the lower school collected for Sumter United Ministries, a countywide nonprofit that provides relief to struggling families and helps them get back on their feet. Mrs. Karina Perkins and her committee organized the community service project on behalf of the PTO.

In the Myrtis G. Osteen “Value of Local History to Me” essay contest sponsored by the Sumter County Museum, Wilson Hall students won two of the top three spots. Mary Parish Williams '24 won second place and $200 and Alli Reagan Fidler ‘24 won third place and $100; both are students of Mr. Tom O’Hare. The contest is open to all high school students in Sumter County.

Wilson Hall students raised $17,371 for the Prisma Health Children’s Hospital by hosting its fifth annual Dance Marathon. In partnership with the University of South Carolina Dance Marathon which raises over half a million dollars every year through the Children’s Miracle Network, the money raised will go to support bettering the lives of children at the hospital. As the main community service project that the school sponsors, Wilson Hall raised a total of $65,796 for the cause during the past five years.

Since an actual dance marathon could not be held this year due to COVID safety precautions, the Dance Marathon Committee sponsored a variety of projects and events to raise money. A Drive-In Movie Night, the Basketball Knockout Challenge, and the Nothing Bundt Cake bake sale were just a few of the activities that raised money in addition to the donations made through the MIracle Network’s website.

Senior Breland Jones is the Chapter Award Winner for the Daughters of the American Revolution Good Citizen Program in Sumter. She will represent Sumter in the state-level competition. The DAR Good Citizens Award and Scholarship Contest, created in 1934, recognizes and rewards individuals who possess the qualities of dependability, service, leadership, and patriotism in their homes, schools, and communities. Each school in Sumter County was invited to nominate one senior for the competition. The nominees submitted a resume and academic transcript, wrote an essay on patriotism, and participated in an interview with members of the DAR. Breland received a perfect score from the judges.

Wilson Hall has earned the College Board's Advanced Placement Computer Science Female Diversity Award for expanding young women’s access to AP Computer Science Principles. This award acknowledges schools for their work toward equal gender representation during the 2019-20 school year. The honor recognizes the outstanding work the school is doing to engage more female students in computer science; Wilson Hall is one of 14 schools in South Carolina and the only school in Sumter County to receive this recognition. Schools receiving the AP Computer Science Female Diversity Award have achieved either 50% or higher female exam taker representation in one of or both AP computer science courses, or a percentage of female computer science exam takers that meets or exceeds that of the school’s female population. In addition to the AP Computer Science Principles class, Wilson Hall offers AP JAVA Programming and 11 other technology classes to high school students.

The primary goal of the program is to promote civic competence and responsibility among students through an instructional program that enhances students' understanding of the institutions of American constitutional democracy. At the same time, students discover the contemporary relevance of the Constitution and Bill of Rights. The culminating activity is a simulated congressional hearing in which students "testify" before a panel of judges. Students demonstrate their knowledge and understanding of constitutional principles and have opportunities to evaluate, take and defend positions on relevant historical and contemporary issues.

Twenty-nine children in the Sumter community received Christmas gifts from Wilson Hall’s lower school students through the annual Angel Tree Project. Each of the lower school classes adopted a child or family through one of the various Angel Tree projects in Sumter, and each class collected money from its families to purchase items from a child’s wish list. The gifts, which included bicycles, toys, educational items and clothing, were brought to the school by parent volunteers for the students to see before being wrapped and delivered for distribution. The gifts were distributed to the deserving children through the Department of Social Services foster care program, The Salvation Army, or Sumter United Ministries.

The students in the Advanced Placement U.S. Government & Politics class taught by Mr. Tom O’Hare placed second overall in the state in the We the People: The Citizen and the Constitution competition. Sponsored by the South Carolina Bar, the primary goal of the program is to promote civic competence and responsibility among students through an instructional program that enhances students' understanding of the institutions of American constitutional democracy. At the same time, students discover the contemporary relevance of the Constitution and Bill of Rights. The culminating activity is a simulated congressional hearing in which students "testify" before a panel of judges. Students demonstrate their knowledge and understanding of constitutional principles and have opportunities to evaluate, take and defend positions on relevant historical and contemporary issues.

Jolicoeur & Owens, Most Likely to Succeed

Seniors Graham VanPatten and Madison DesChamps received the honor of Mr. and Miss Wilson Hall. Each fall the upper school faculty nominates students for Mr. and Miss Wilson Hall and the Mr. and Miss for grades 9-11. When nominating a student the faculty considers the following factors: above average academics, participation in athletics and/or extracurricular activities, outstanding citizenship, and excellent character.
From the list of faculty nominated candidates, students in grades 9-11voted for their own class, and all students in 9-12 voted for Mr. and Miss Wilson Hall. While voting, students considered the same criteria the faculty considers when choosing the most well-rounded representatives of their class and of Wilson Hall.
The following underclassmen received this honor: Mr. & Miss Junior – Alex McLeod and Lucy Matthews , Mr. & Miss Sophomore – Cameron Coulter and Annabelle Huffman, and Mr. & Miss Freshman – Landon Gilley and Marybeth VanPatten.

Wilson Hall was named the Best Private High School in Sumter County for the second consecutive year by the website Niche. The ranking is based on rigorous analysis of key statistics and reviews from students and parents. Ranking factors include SAT/ACT scores, the quality of colleges that students consider, student-teacher ratio, private school ratings, and more. Data sourced from the U.S. Department of Education, Niche users, and the schools directly.

Yard of the Month 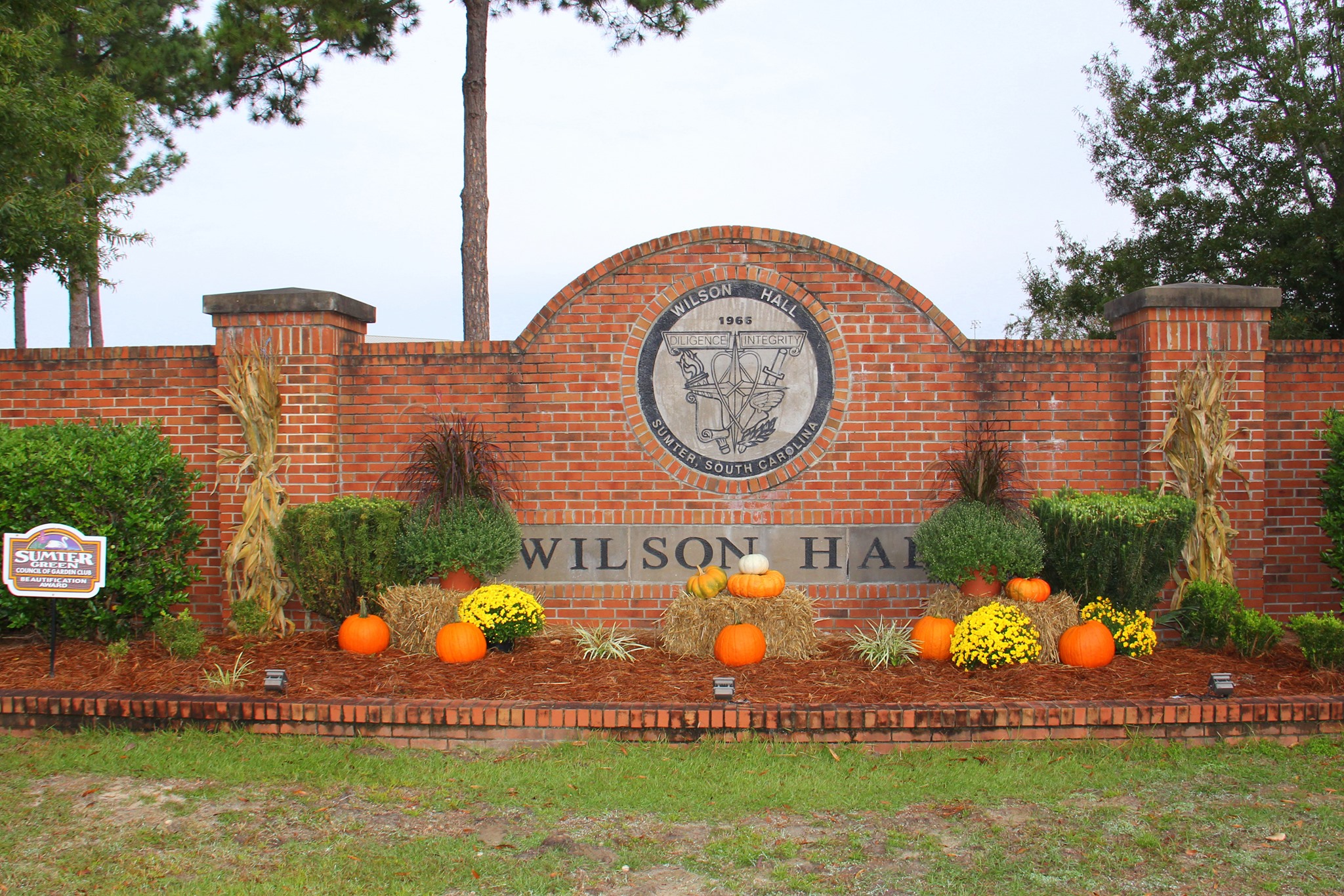 Wilson Hall was selected as the October Yard of the Month for businesses by the Council of Garden Clubs of Sumter. The PTO Landscaping Committee is responsible for the beautification of our campus by maintaining the many planters and flower beds throughout the year.

Eighth-graders David Texas Ardis, Thomas Creech and Sara Helen Simmons qualified for state-level recognition by the Duke University Talent Identification Program this past spring. To qualify for this honor students had to score at least a 540 on the math portion or a 540 on the reading and writing portion of the SAT.  These students, who took the SAT as seventh graders, earned a score equal to or better than half of the college-bound seniors who took the tests.

The school welcomed 139 new students to the Wilson Hall family, opening with a total enrollment of 758 students in three-year-old preschool through twelfth grade. Wilson Hall is beginning the school year with a hybrid learning model to allow choice. Most students are choosing in-person instruction on campus, while some are participating in remote learning with real-time, live-streamed classes through platforms such as Google Classroom.

Celebrating the Class of 2020

The 53 members of the Class of 2020, the 50th graduating class, joined the 2,527 people who count themselves among the ranks of Wilson Hall’s alumni. Merit-based scholarships, valued at $4.9 million, were awarded to 96% of the graduates. The scholarships included nine full academic scholarships, 32 half academic scholarships, eight Palmetto Fellow Scholarships, and 36 Life Scholarships. The average SAT score for the top 25% of the class is 1384, with a high score of 1490, and the average score for the entire class, with all seniors taking the SAT, is 1203. Over 88% of the graduates took at least one Advanced Placement course, with the average student taking at least four, and were eligible to receive college credit.

Members of the Class of ’20 volunteered over 3,000 hours of community service during the school year. The recent graduates contributed to the school’s newspaper which was named the Best in State, and participated on the Chess Team, Competition Dance Team, Debate Team,  Literary Meet Team, and Reading Fair Team which won multiple state championships during their high school careers. They also won the top awards in the state for art and music competitions, and they were members of the state champion softball team.

Senior Mary Catherine Matthews received the Larry K. Watt Award presented by the S.C. Independent School Association to recognize the academic service-based achievements of seniors. It is one of the highest awards presented by the association which has over 110 member schools, and Mary Catherine is the only student who attends an AAA school in SCISA to receive the award. To be eligible for the award, the student must be nominated by the school and recommended by the headmaster. The nominee must have a minimum of 50 hours of documented community service after June of the student’s junior year (Mary Catherine has 440 hours) and a minimum 3.0 GPA. Once nominated, the student must submit a 500-word essay outlining the importance of community service as well as three letters of recommendation from school or community leaders who have personally witnessed their service initiatives.

Wilson Hall was voted Best Private School in the Best of Sumter 2020 contest sponsored by The Sumter Item. Voting for the annual readers' choice contest was held in February and garnered nearly 400,000 votes.