Field trips to local venues such as the Sumter Fire Department or the Sumter County Museum to week-long trips abroad to the Dutch Caribbean, Ecuador or France, in addition to overnight trips to Charleston, New York City, the mountains of North Carolina, or Washington, D.C., only further expand the experiences and learning opportunities of students. 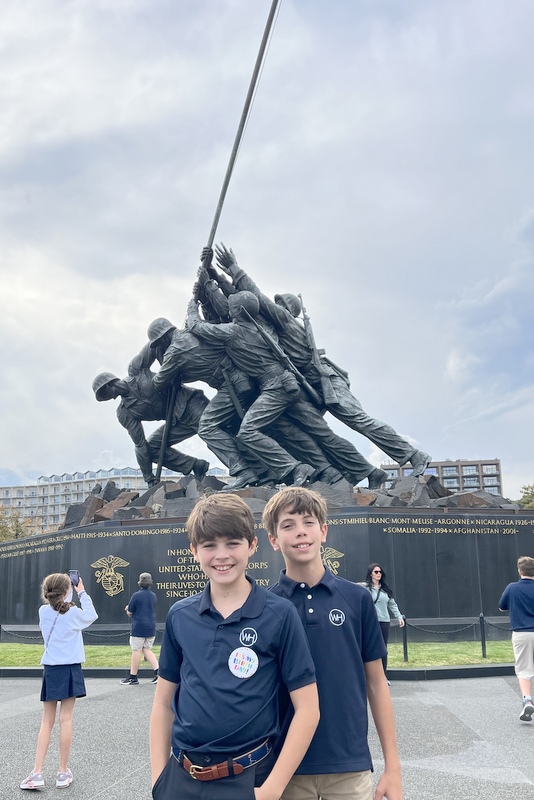 Filling three chartered buses, the fifth grade students and their parents and chaperons, led by the trip’s coordinator, Mr. Charles Smith, departed for the school’s 39th trip to the Washington, D.C., area on October 15. The group spent two full days sightseeing in the city and the surrounding area, visiting such points of interest as the Capitol, Library of Congress, National Cathedral, White House, Supreme Court, and Washington Monument. They also visited Arlington National Cemetery and the Iwo Jima, Jefferson, Vietnam War and World War II Memorials, as well as Embassy Row, Kennedy Center for the Performing Arts, and National Archives. The group visited the Smithsonian’s American History and Natural History Museums, and an evening tour of the city included the illuminated Air Force, Korean War, Lincoln, Franklin Roosevelt, and Martin Luther King Jr. Memorials. They also toured Mt. Vernon and its educational center. The group spent a day at Colonial Williamsburg in Virginia and visited Jamestown Festival Park before returning home on October 19. As an assignment in conjunction with their U.S. History unit of their social studies class taught by Mrs. Frances James, the students will give a Google Slides presentation about their trip to their parents. 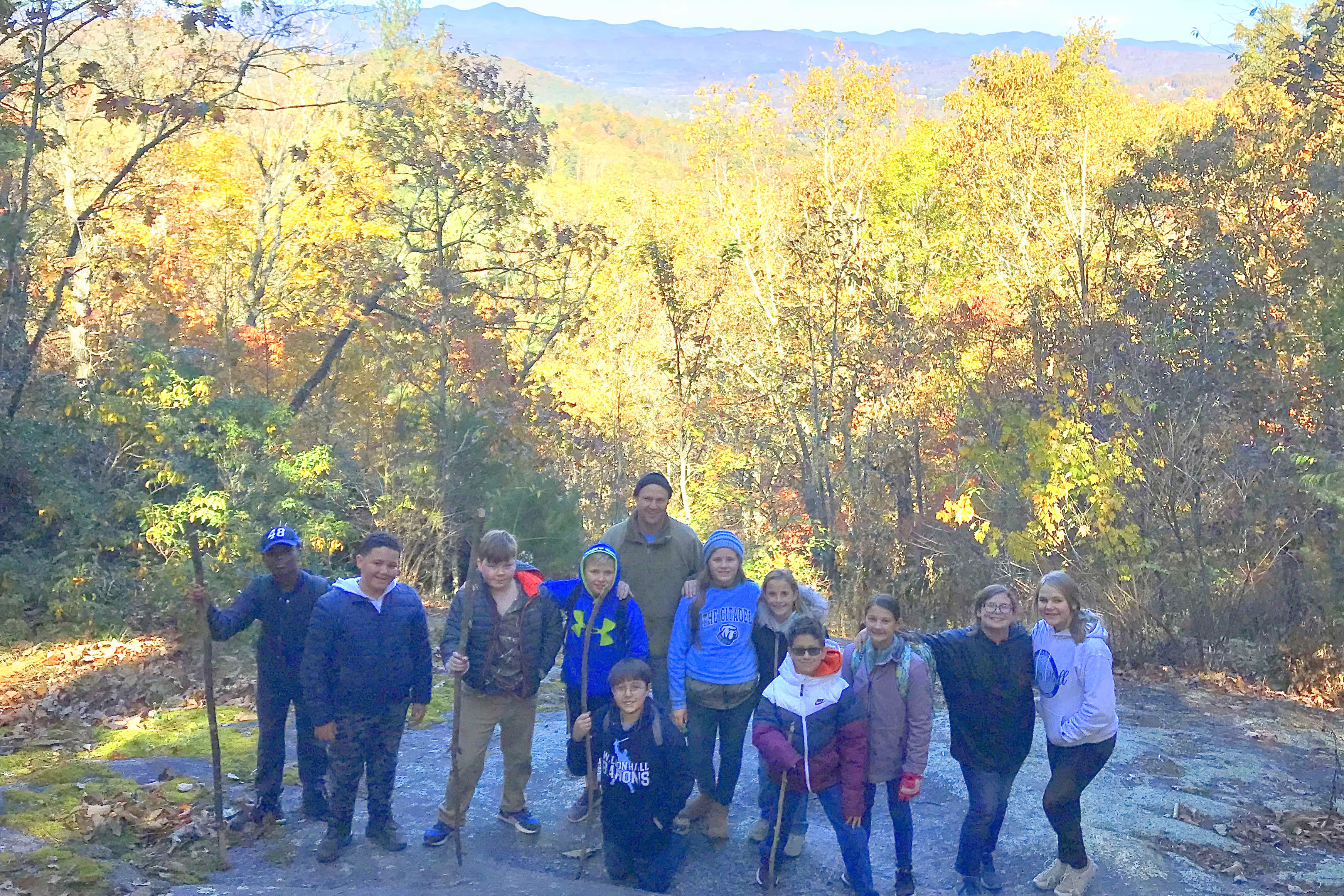 Through activities such as white water rafting on the French Broad River, the sixth grade experienced an educational and enjoyable trip to Camp Kanuga in Hendersonville, N.C., from October 19-21. The school’s 20th trip gave the students the opportunity to participate in four classes taught by the Mountain Trail Outdoor School which is located in the Appalachian Mountains. These classes included a co-operation and low ropes course, a hands-on course in rappelling, an orienteering and wilderness survival course, and a course in forest ecology. Students also enjoyed activities to promote bonding and team building with their classmates, such as campfires and recreational games, as well as time for daily devotion. 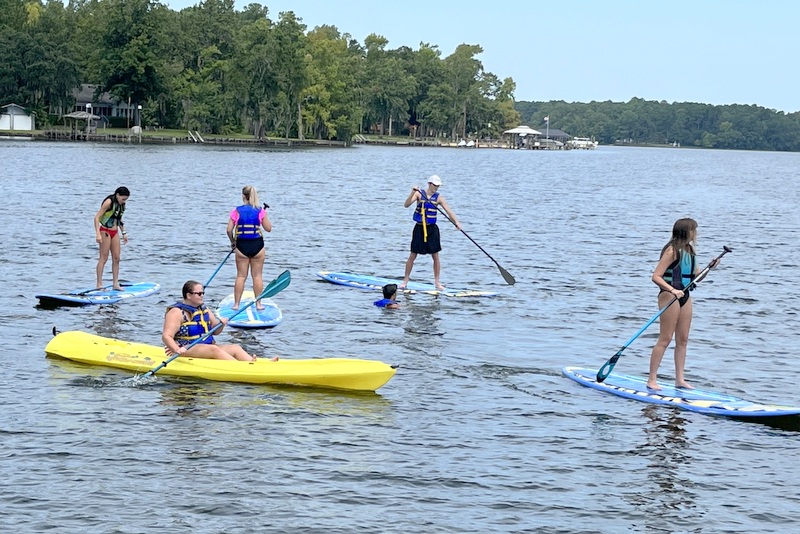 As a follow-up to their Junior Class Retreat in the spring, the members of the Senior Class attended a day-long retreat at Camp Bob Cooper on the shores of Lake Marion in Summerton. The event expanded on the purpose of the Junior Retreat, which provided students with a beyond the classroom walls experience with a focus on loyalty, leadership and legacy. The class had several sessions, led by faculty members, regarding re-evaluating the class and individual goals set in the spring and how these goals are being realized. Students enjoyed recreational time in and on the lake including swimming, volleyball, log rolling, and jumping on the “blob” before having lunch and heading back to campus. Mrs. Laura Barr coordinated the event. In conjunction with their history class taught by Mr. George Carruth and science class taught by Mrs. Sheri Singleton, seventh graders visited the Charleston area from May 3-5. The group spent two nights on the USS Yorktown at Patriots Point Naval & Maritime Museum and visited Fort Sumter and Charles Towne Landing.The group spent a day on a boat tour with Barrier Island EcoTours and visited Capers Island where the students studied the ecology and enjoyed lunch on the beach.

As part of the curriculum, the members of the Junior Class attended the 17th Junior Class Retreat at the Kanuga Conference Center in Hendersonville, North Carolina, March 27-29. The retreat provided rising seniors with a “beyond the classroom walls” experience with a focus on loyalty, leadership and legacy. It included group activities, structured discussions, and opportunities for enjoying the facilities of the conference center located in the mountains of North Carolina. Activities included an obstacle course operated by the Mountain Trail Outdoor School, team-building exercises, and cooperation games. Dr. Milt Lowder ‘90, a licensed counseling psychologist in Greenville, delivered the keynote speech with the topic of “Defining Success.” There were also presentations given by Mr. Fred Moulton, Head of School, as well as from some of the dozen faculty members who attended the retreat.

Students in the art and theater classes, escorted by their teachers, visited New York City for a fine arts appreciation trip from March 10-13 and stayed in the Hilton Midtown in Manhattan. To learn more about artists, art history and different styles of art, the group visited the Museum of Modern Art, the Museum of Art and Design, and the Whitney Museum.

For the experience of live theater, students attended one of the following Broadway shows in the Theater District: Aladdin, Moulin Rouge, Six, or Wicked. Expanding their theater experience, students and chaperons participated in a private improvisational acting class held in a private studio in Midtown.

The trip provided the opportunity for students to experience the culture of New York City as they visited the Color Factory, Times Square, and Rockefeller Center, and shopped and dined in SoHo and Midtown.