Wilson Hall is a certified Science, Technology, Engineering, Arts and Math (STEAM) school by the South Carolina Independent School Association (SCISA). To earn the certification, the school met SCISA STEAM standards that include having an inquiry-based learning environment for students that encourages problem-solving, students working independently and collaboratively, and students demonstrating creative and critical thinking.

Other STEAM standards include students using technology resources to conduct research, learning through performance-based assessments, and students demonstrating oral and verbal communication skills to express and elaborate their conclusions. Students in each class, from three-year-old preschool through twelfth grade and across all academic disciplines, participate in STEAM activities.

Decimals in the Dark 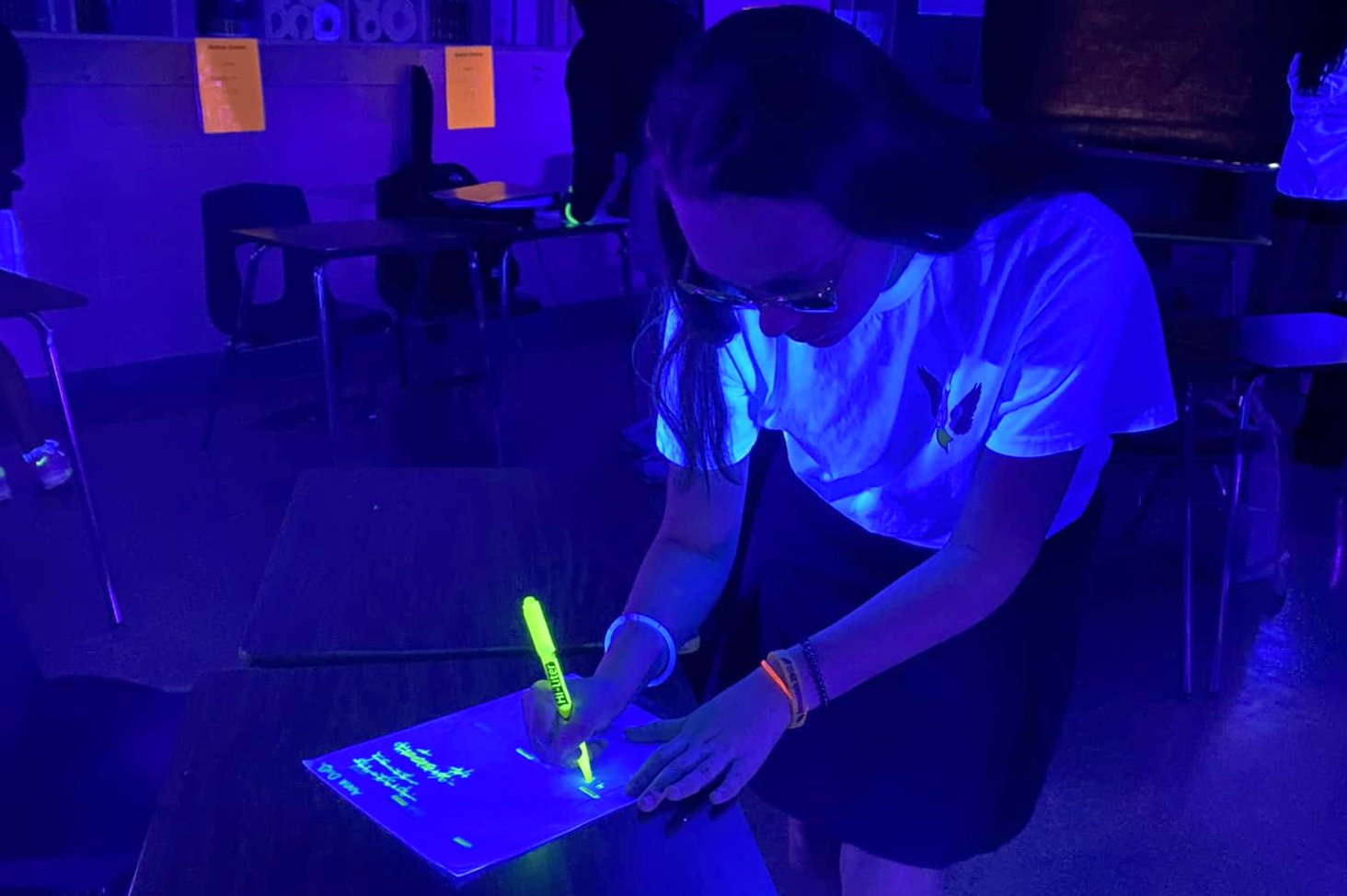 As an interesting and unusual classroom activity, students in the Pre-Algebra II class participated in Decimals in the Dark. The class used black lighting and fluorescent markers to complete a variety of problems using decimals. 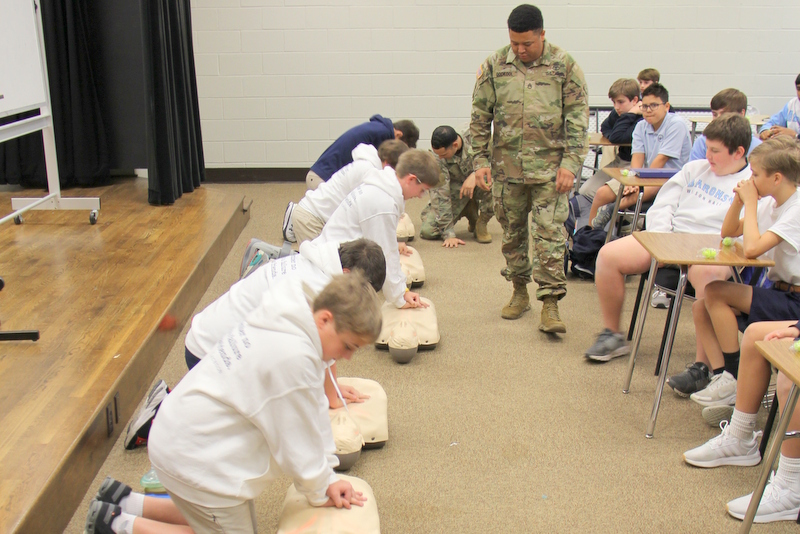 While studying basic first aid in their health class, seventh grade students learn how to administer CPR on a model of a medical simulator used for teaching both emergency workers and members of the general public. Soldiers with the U.S. Army Central Headquarters conducted the training for the class. 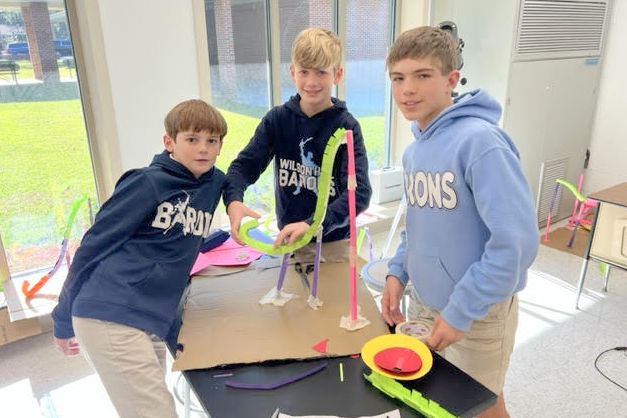 Using their knowledge of potential and kinetic energy learned in their science class, sixth grade students visit the STEAM Lab to begin designing and constructing roller coasters made entirely of card stock and tape. A marble must make three successful runs on the completed structure including at least one loop, one hill, and one curve. 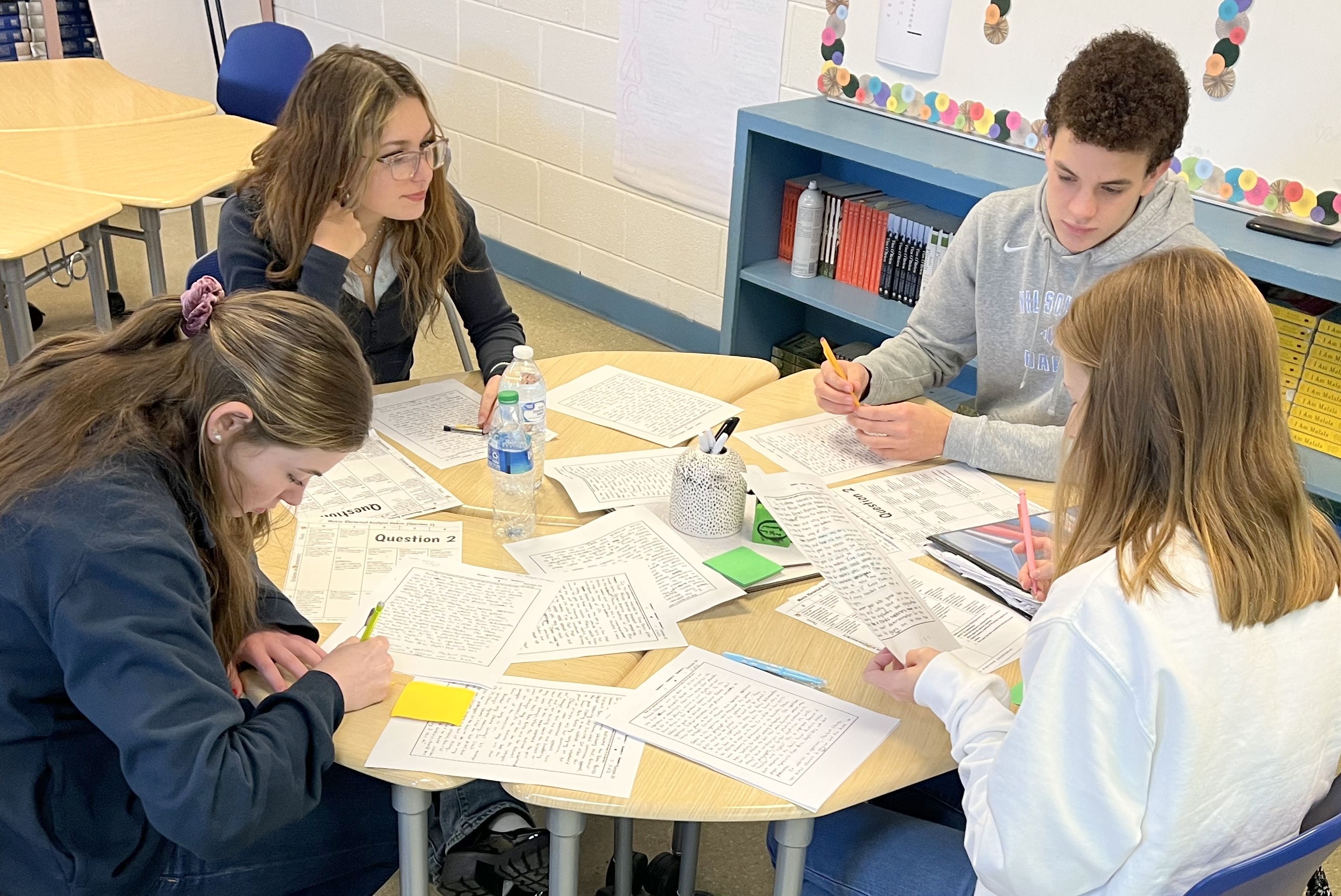 Juniors and seniors in the Advanced Placement English Language class, taught by Mrs. Molly Matthews, confer in groups about sample rhetorical analysis essays and predict scores based on the AP rubric. 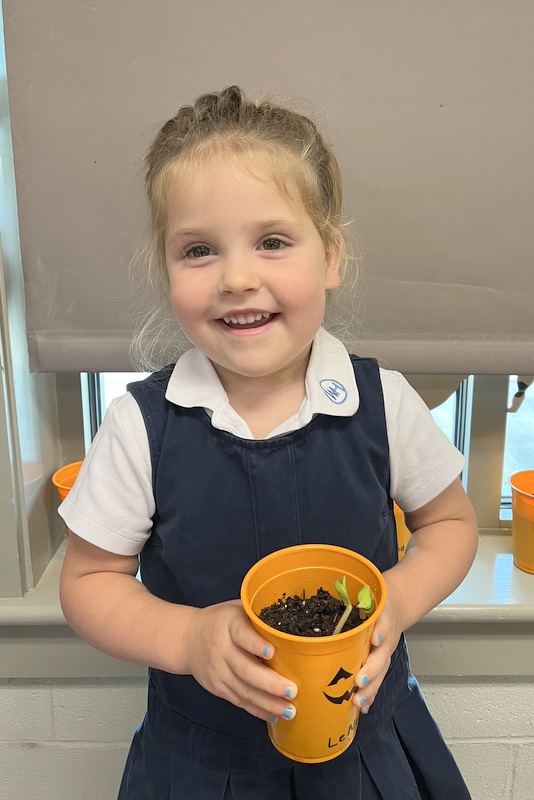 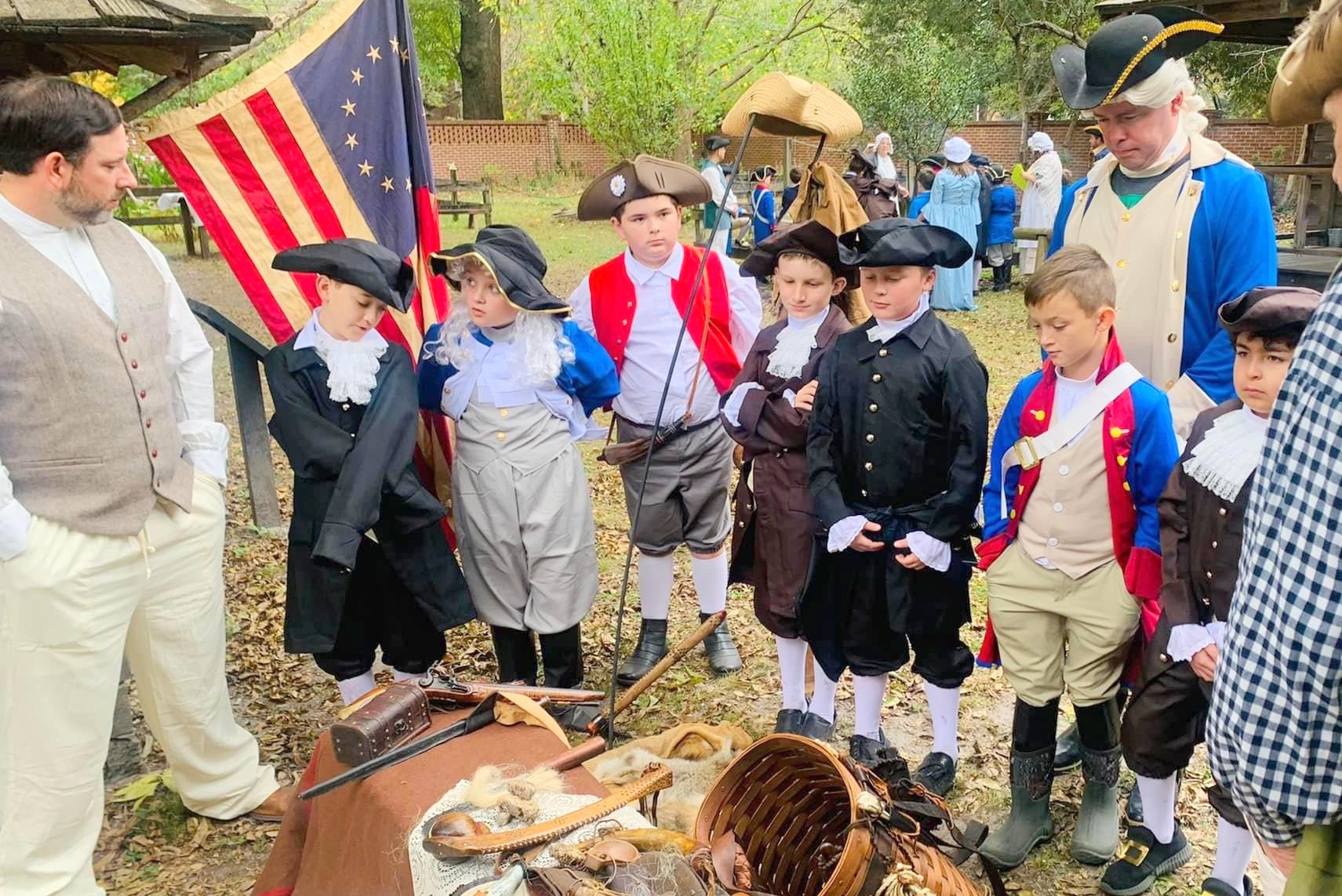 As part of the curriculum in their U.S. History class, the fourth grade students participated in the Wilson Hall Colonial Day which was held at the Carolina Backcountry Homestead at the Sumter County Museum on November 10. This recreated homestead, which hosts living history events, includes a log cabin, settler’s house, a smokehouse, barn, commissary (storehouse), loom house, outhouse, blacksmith shop, and gardens. Colonial Day offers a hands-on learning experience about daily life during the late 18th and early 19th centuries. Dressed in period costume, the students participated in a wide variety of activities including colonial cooking and a militia drill. Also dressed in period costume, parent volunteers and teachers assisted the museum’s staff and volunteers with the different activities throughout the day.

Students in the 7th G 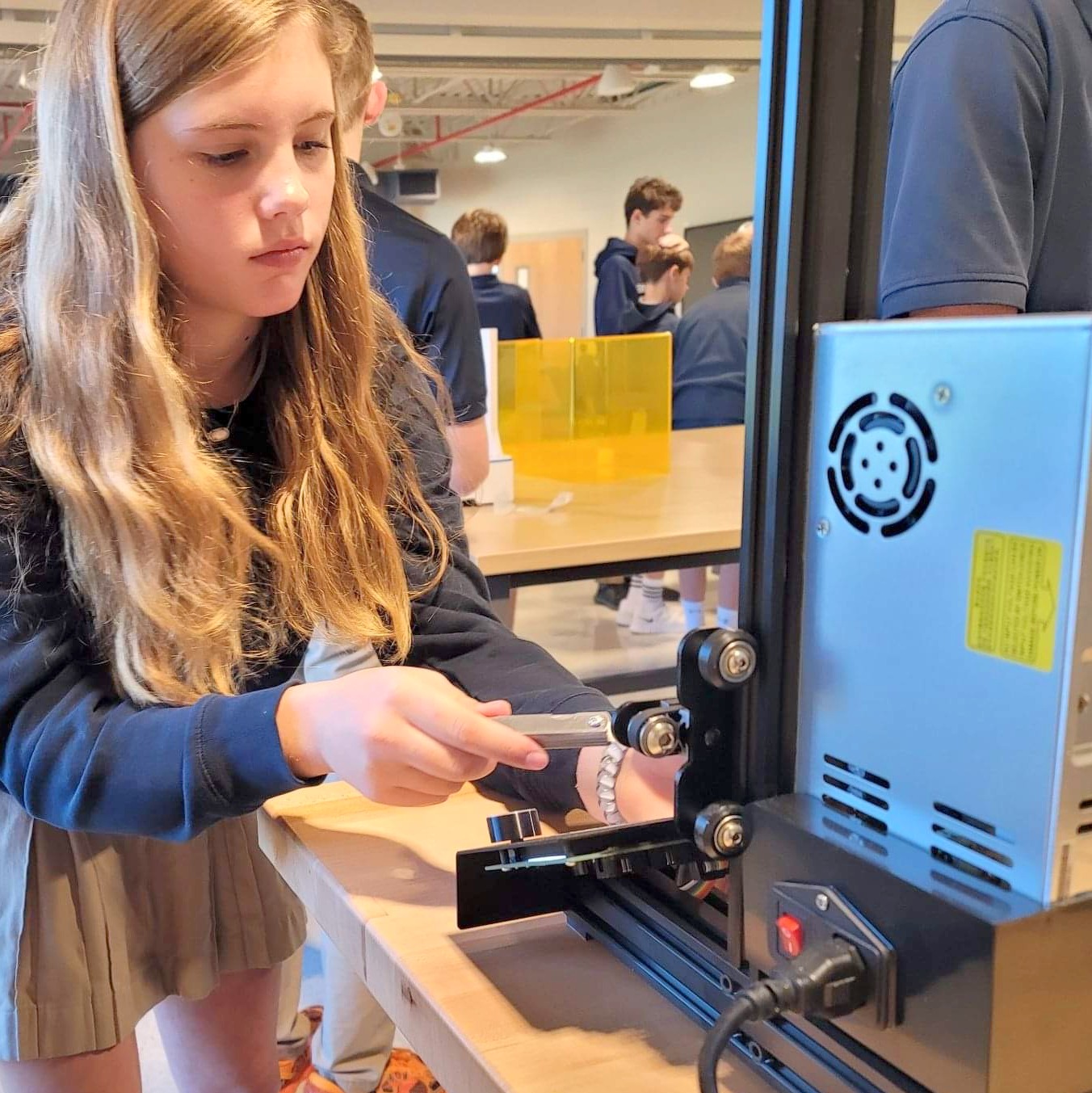 rade Robotics class reassemble and level the 3D printers in the Engineering Lab. 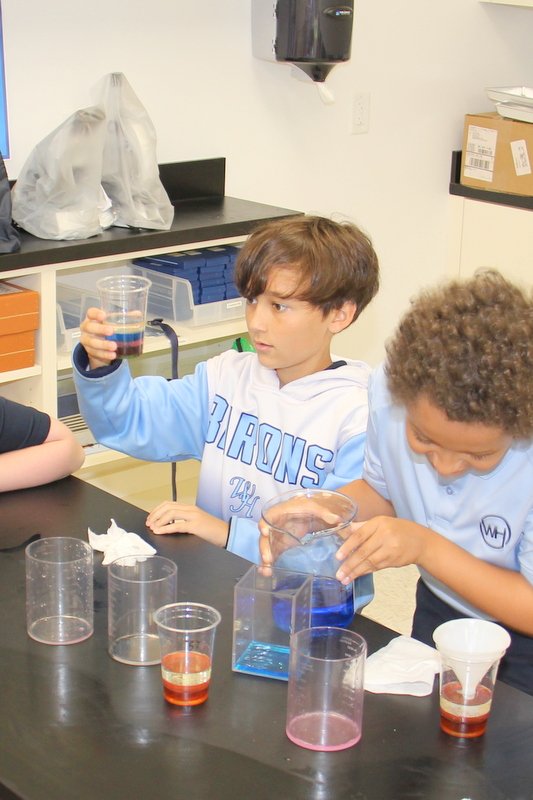 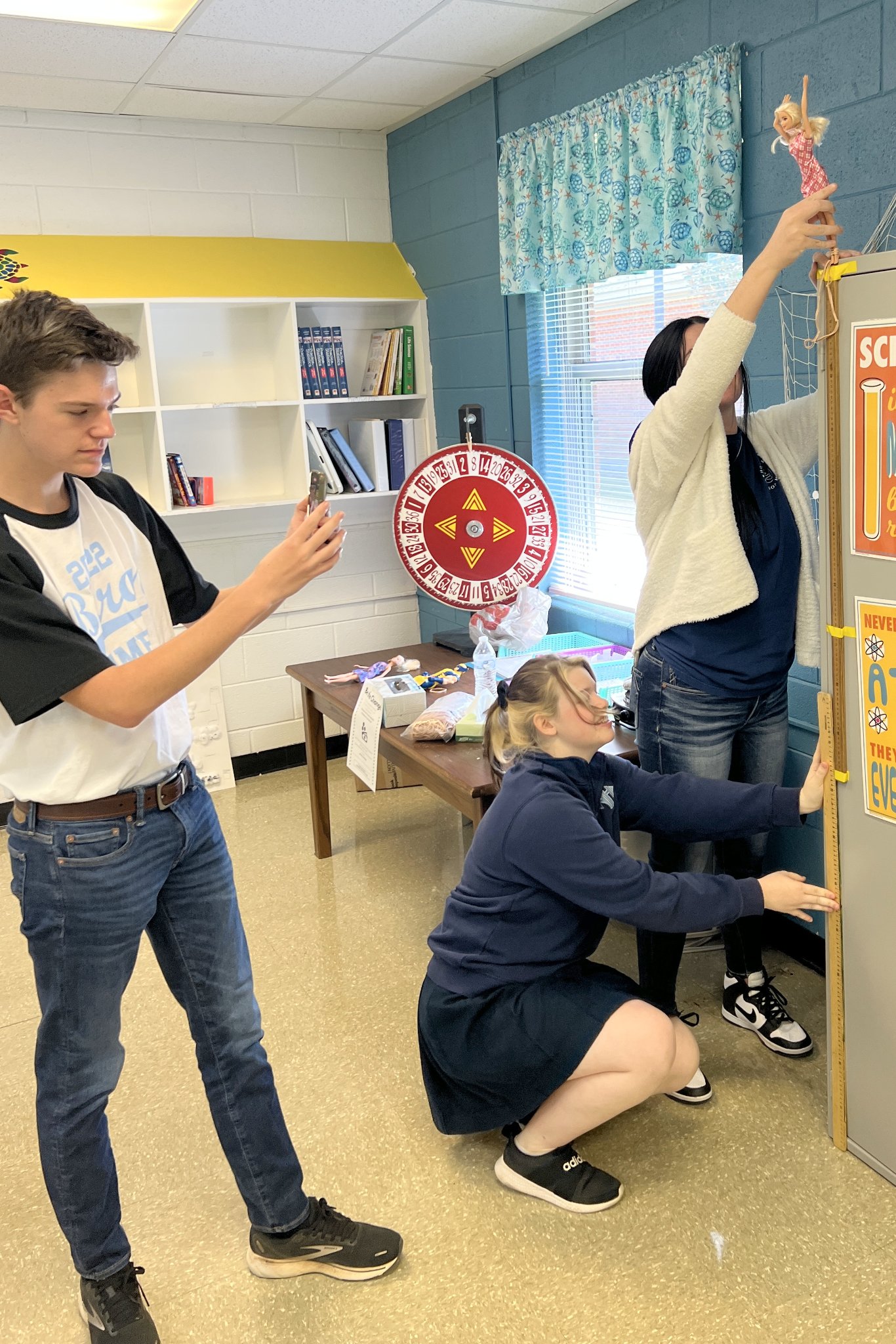 Students in the Advanced Placement Statistics class begin a new unit on calculating and interpreting regression lines. Throughout this unit, the students will gain all the tools necessary to calculate and execute a successful Barbie Bungee jump. Their calculations will be tested from the rooftop garden. 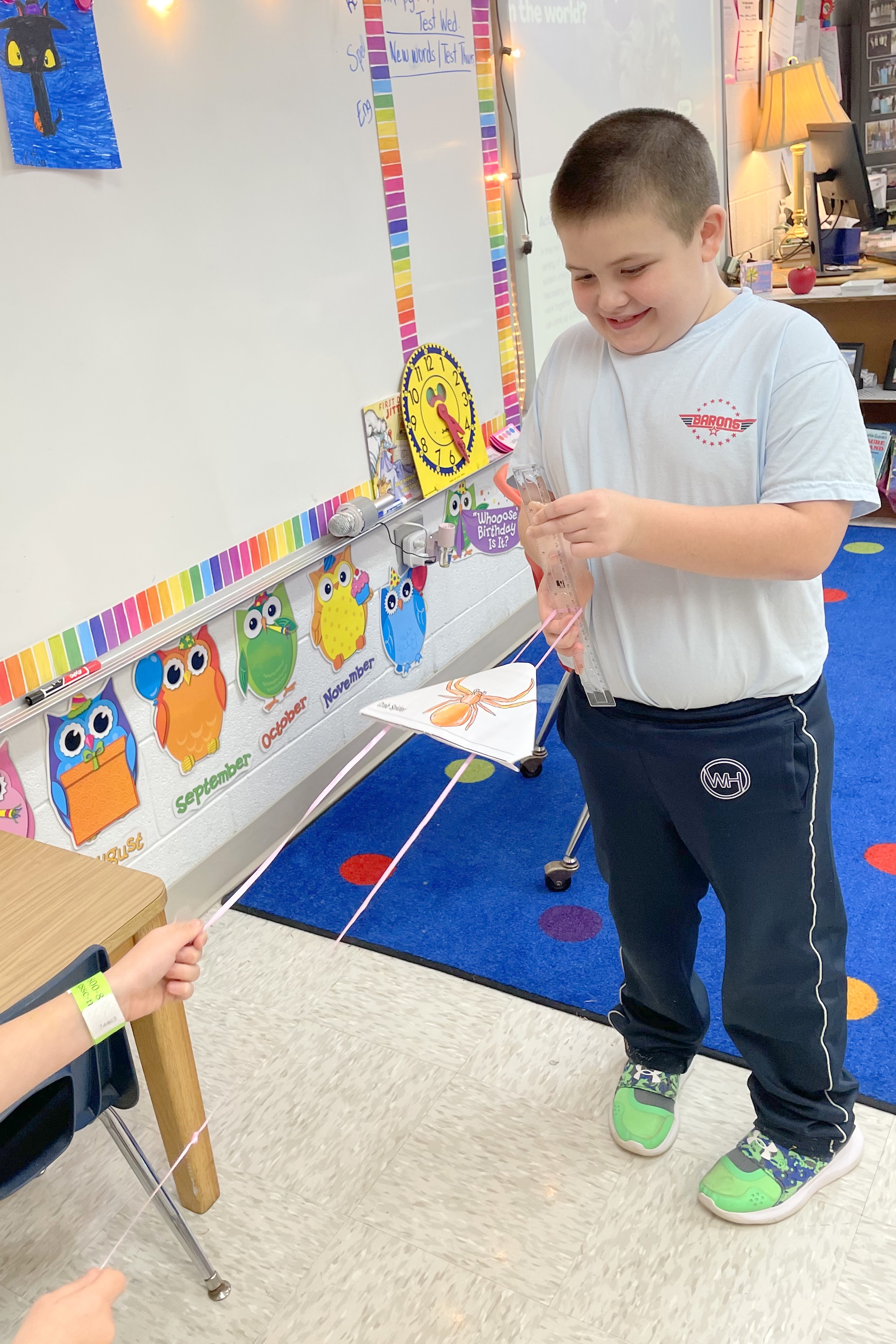 After studying the different types of spiders, second grade students created spider climbers as a STEAM activity. Using paper, tape, and ribbon, each student built a spider that could climb a string. 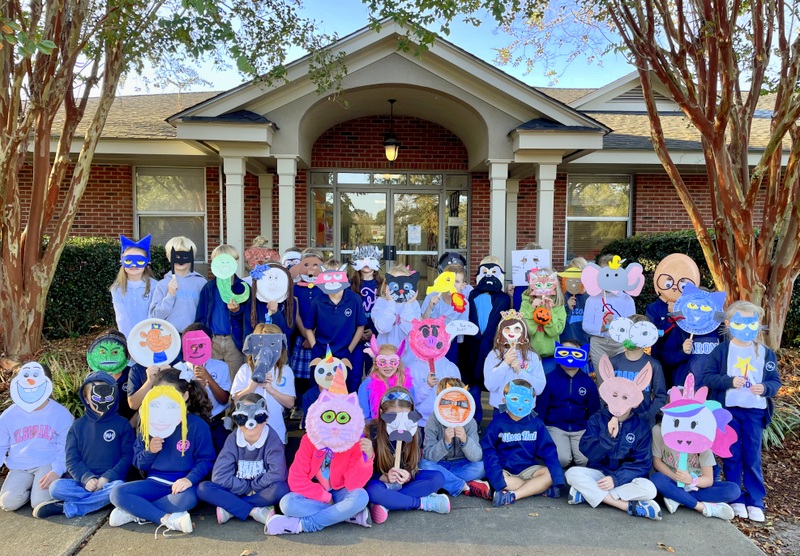 As a STEAM project, first grade students designed masks based on the main character of a book they read.  From the point of view of the character, students described to their classmates the story elements of setting and main idea. 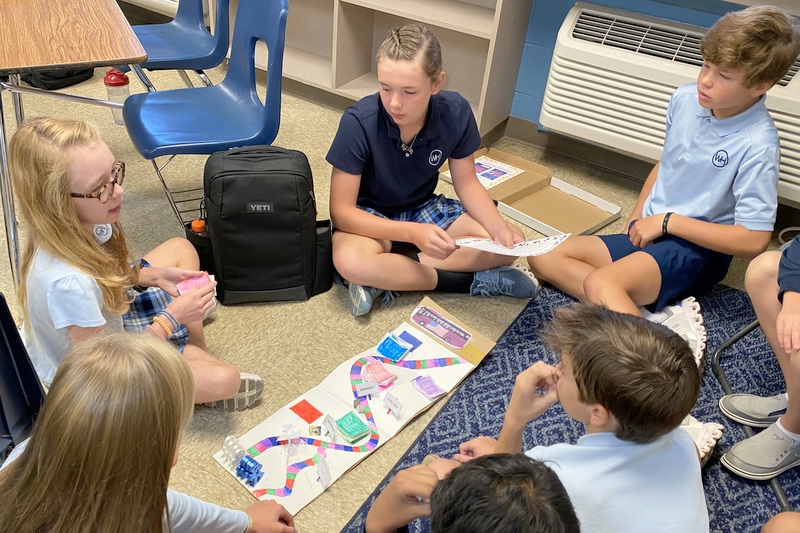 Students in the 7th grade literature class collaborate on a STEAM project in conjunction with their required summer reading, a game of their own creation which incorporates literary elements. 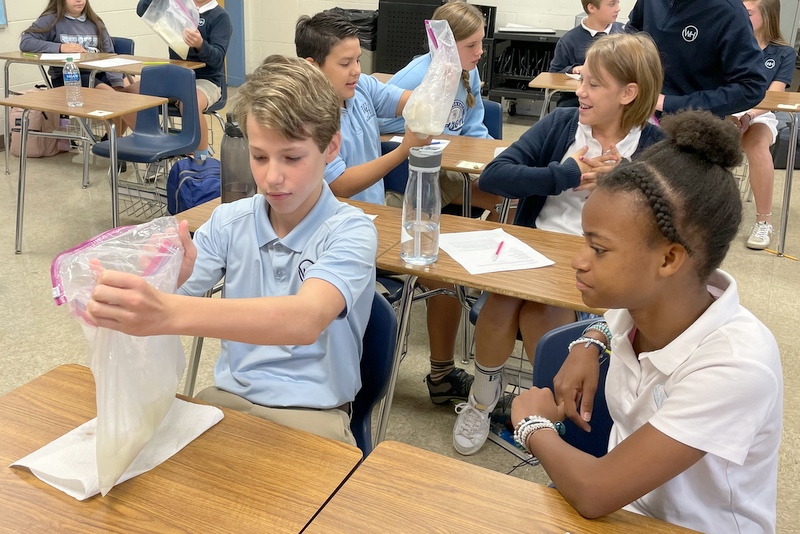 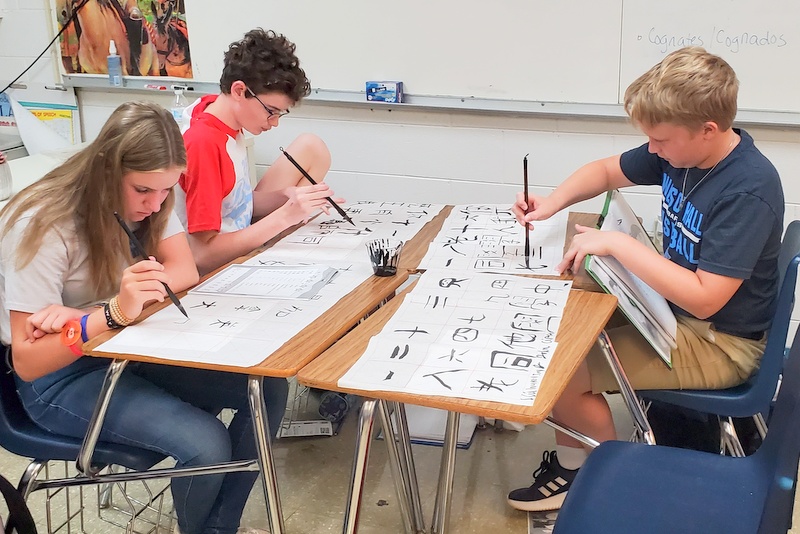 While learning Chinese in their Introduction to World Languages class, eighth grade students practice their Chinese calligraphy as a STEAM activity. 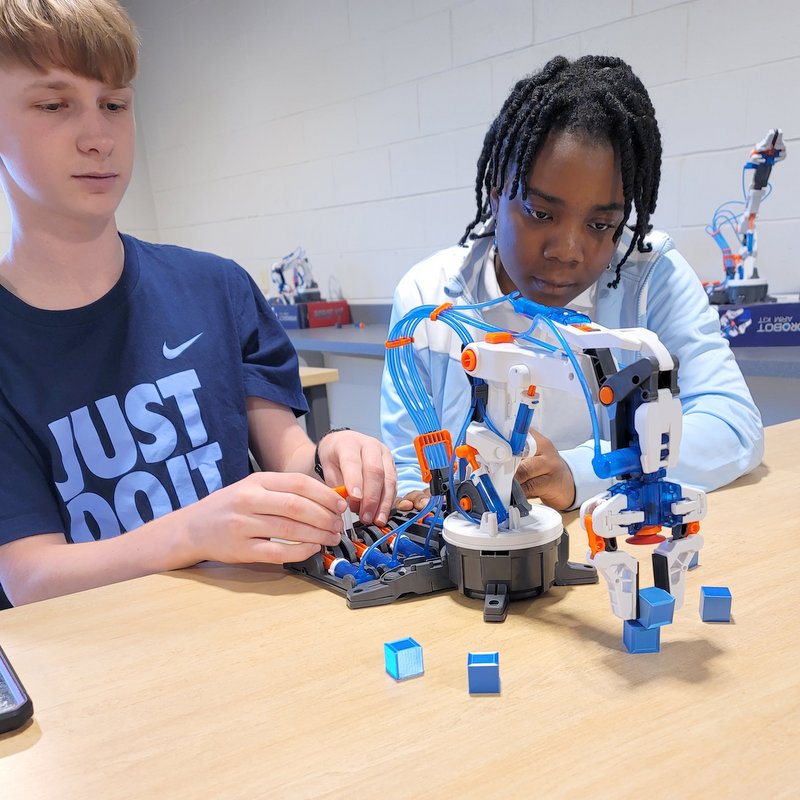 Freshmen in the Robotics I class construct a hydrobot arm, which uses hydraulics as a power source. 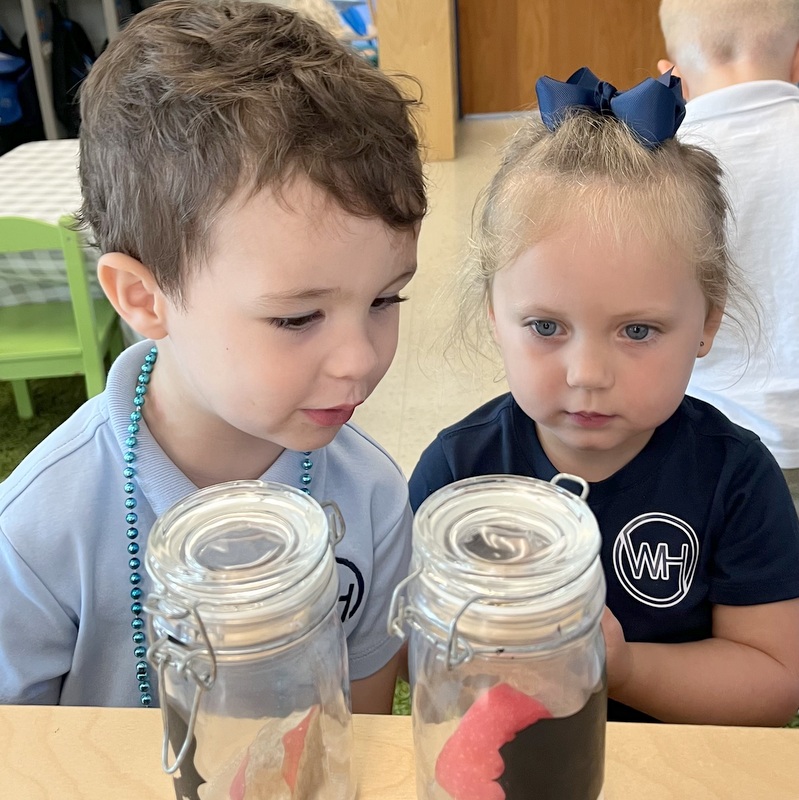 Three-year-old preschool students conduct their first science experiment of the year, observing the different reactions to apples that are clean or dirty. 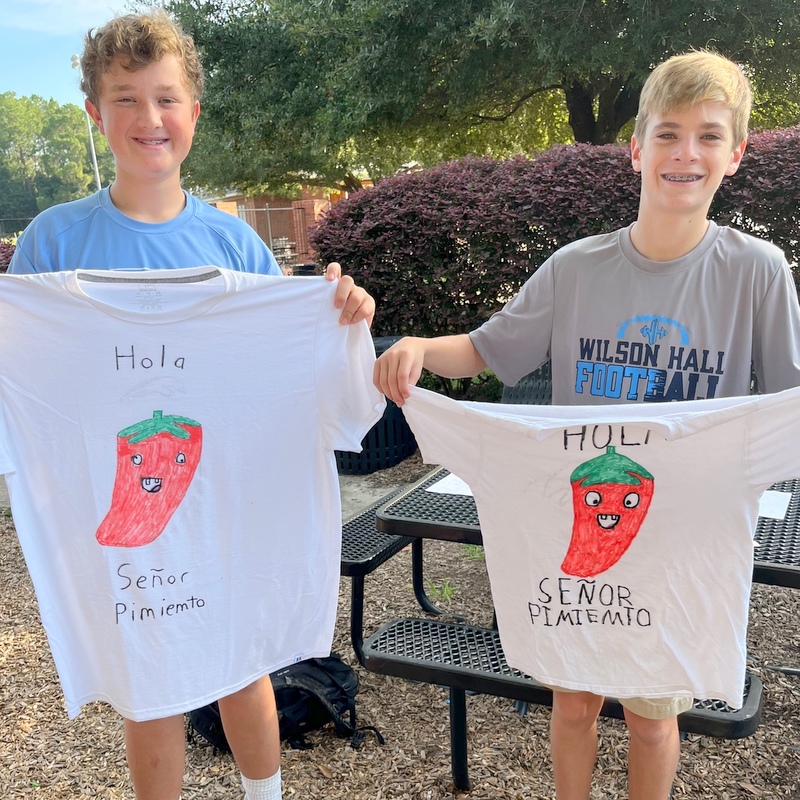 As a fun STEAM project conducted outside, 8th grade students learning Spanish in the Introduction to World Languages class create “greetings” shirts to reinforce their vocabulary. 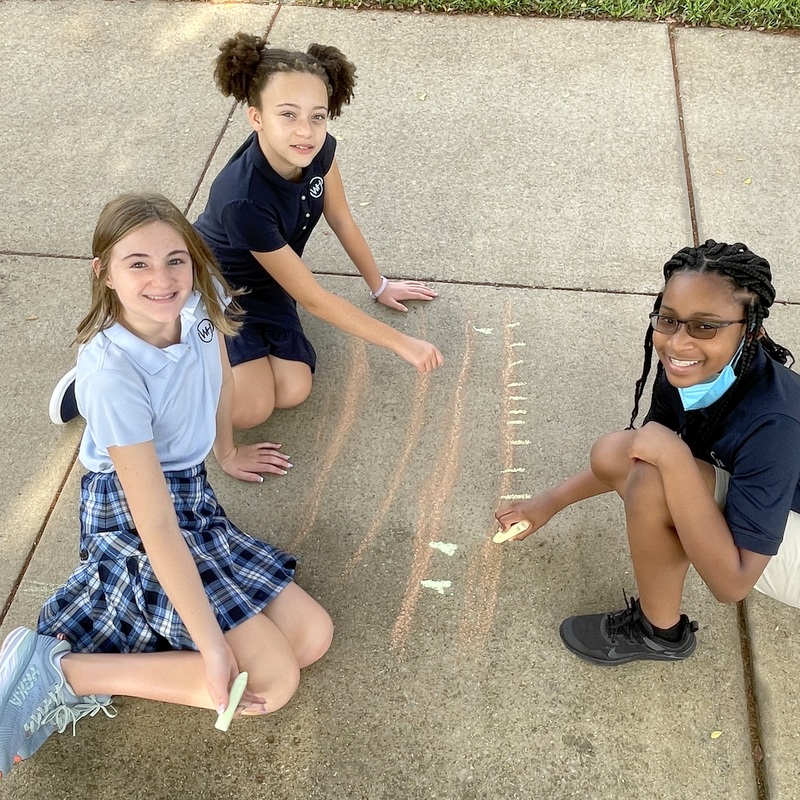 Students in 6th grade history participate in a STEAM activity to reinforce their learning of vocabulary words. The assignment was to break into groups. randomly select a word, and then draw with sidewalk chalk a representation of the word, without using any words. After the groups were finished, they viewed each drawing to determine what vocabulary word it represented and explain how they reached that particular conclusion. 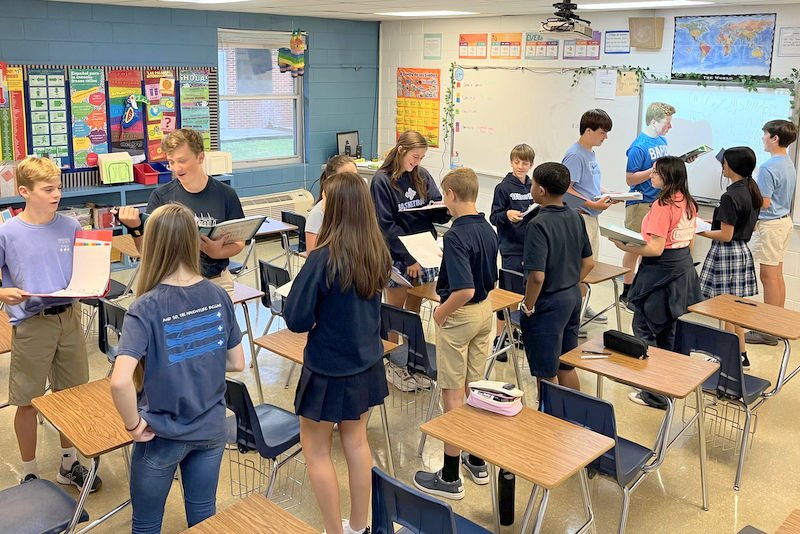 Eighth graders practice conversations in their Spanish class which is part of the required Introduction to World Languages course. All 8th graders will have Chinese, French, and Spanish for one-third of the year before they choose which world language they will pursue in high school. All students are required to complete at least three years (four years are offered) of the same world language.

Students in the Honors Anatomy class 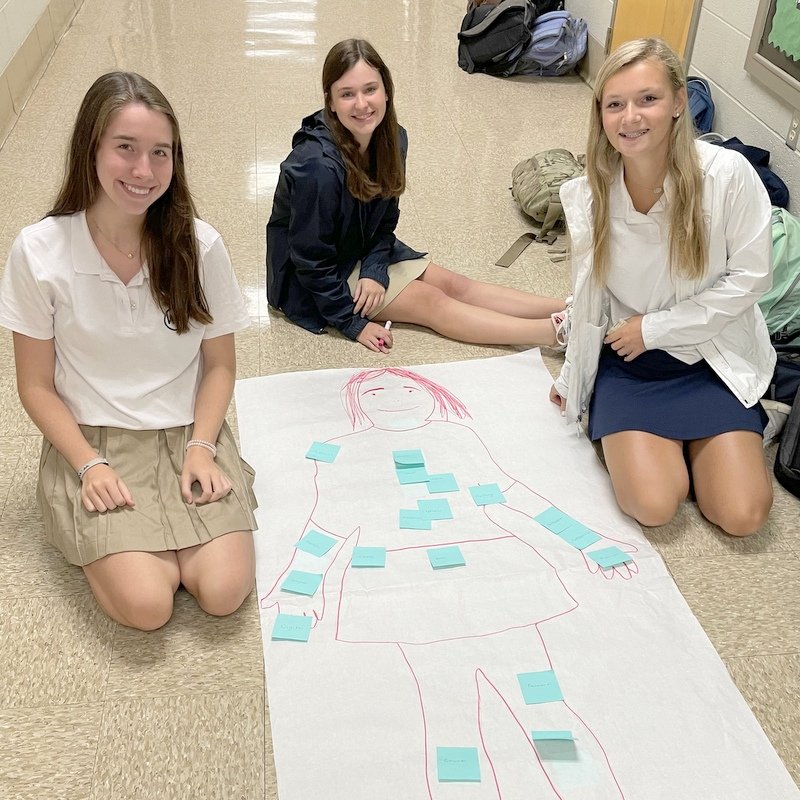 practice body region terminology in a STEAM activity this morning. 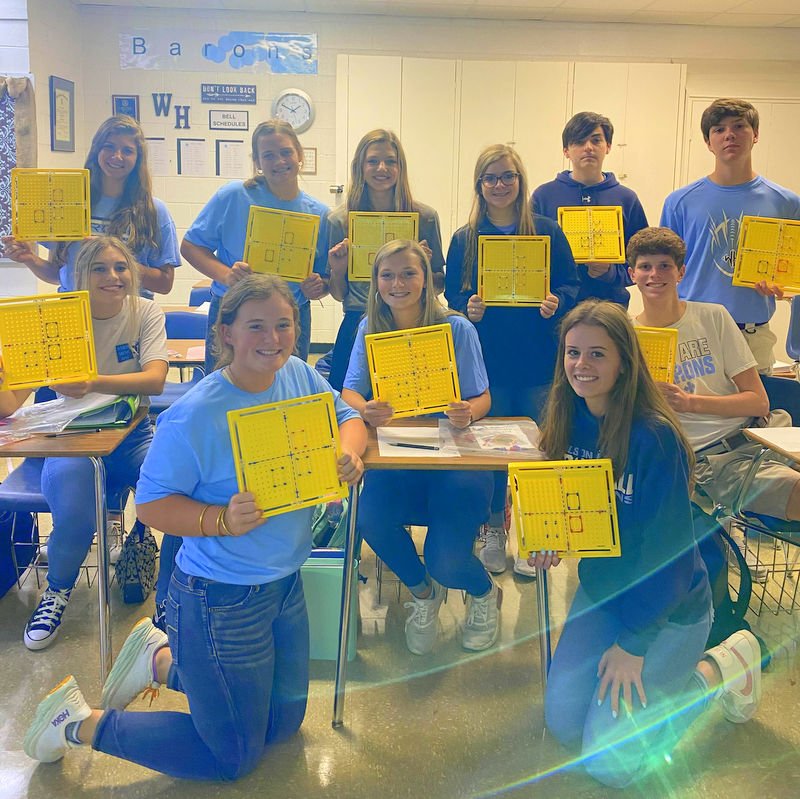 Students in the Algebra II Plus class utilize X-Y coordinate peg boards to graph the transformations of figures. This STEAM activity focused on performing and describing translations, reflections, and compositions of these transformations.